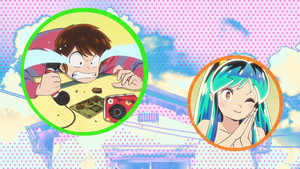 Urusei Yatsura is a classic whether you like it or not. It was one of the most popular manga of the early 80s, it jettisoned manga creator Rumiko Takahashi into superstardom, and you can even see it as the progenitor to certain tropes that some people might be sick of today. But the tricky thing with a modern adaptation of a classic romantic comedy like this is whether or not its humorous antics will stand the test of time. After all, not everything ages the most gracefully, and that’s especially true for comedy.

I haven’t watched much of the previous adaptations outside of a few clips of the different dubs that exist for this franchise (if you don’t know what I’m talking about, please look up the British dub on YouTube because it’s amazing) and I haven’t read the original source material, so I am reviewing this adaptation mostly blind. But so far, I do like what I see. Not only is the pacing of this first episode incredibly snappy and dynamic, but a lot of little things make it very clear that this is an adaptation filled with a lot of love for the very era that the show came from.

I wouldn’t necessarily call this premiere funny as much as it is just entertaining. I didn’t laugh at any of the lechery that was going on but I did like the way that the episode juxtaposes a lot of different elements to keep things consistently interesting. For example, our main character, Ataru, is a perverted teenage boy, but he also has some of the worst luck ever. They’re making it clear that even if things go well for him, it’s either not going to last long or an equally bad thing will happen to him in order to balance everything out, which leads to a lot of creative scenarios that I think the show capitalizes on quite well. You’re not supposed to really root for Ataru, but you also still kind of feel bad for him because he’s still kind of put into a situation that isn’t exactly his fault. It almost feels like I’m watching an old anime version of Johnny Bravo.

Lum also plays with this dynamic of being an incredibly powerful and capable love interest that kind of walks that line of sort of being the villain of our story. Think about it: she’s causing untold mayhem and is constantly inflicting pain on our main character but that’s only because she wants to be a nice, loving wife for him. I am also in love with the character design of Urusei Yatsura; I’m not sure if it had as much of an impact on pop culture as much as other shows that came out from around this era, but I’m very curious about the impact these designs have had on those who first encountered them back during the late 70s through early 80s. For now though, I can only speak to the impact that it’s had on me and it’s been mostly positive. I wonder if this 2022 adaptation will be able to keep up this entertaining back-and-forth or if it will eventually show its age with story elements that maybe should’ve stayed in the past.